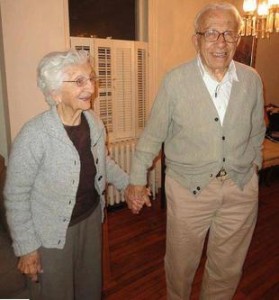 John and Ann Betar eloped in 1932, and now, 81 years later, they are still happily married.

John, 101, and Ann, 97, of Fairfield, Conn., were named the longest-married couple in the United States by the faith group Worldwide Marriage Encounter according to the New York Daily News.

“Here you have a couple who made a commitment, and they stuck to it,” Worldwide Marriage Encounter spokesperson Dick Baumbach said. John and Ann were selected out of 297 nominations collected between October 2012 and January 2013. While there may be longer marriages that were not nominated, Baumbach explained that each year the group encourages more submissions.

According to a frequently updated Wikipedia site, John and Ann hold the 16th place for the longest marriage. According to the site, Karam Chand and Kartari Chand from the United Kingdom, hold the No. 1 spot, with 87 years of marriage.

As for the Betars, they met as children, but Ann’s parents had arranged for her to marry another man, one who was 20 years older than her. Although Ann was not excited about the arrangement, John said it took some time to convince her that he was the right one.

“I fell for her right away,” John told ABC News. “I used to have a Ford Roaster and I used to pick her and her friends and drive them to high school. Gradually she liked me and we got together.”

For Ann, who was only 17 years old at the time, it was a big decision to choose John and go against her parents’ will.

“At 17, you wonder if you’re making the right choices,” she told ABC News. “I had grown up with him and we had good times together and we knew each other very well. And it’s turned out to be 80 years. … God seems to have been with us. And we’ve been very fortunate and wonderful.”

“They were going against all odds,” Renee Betar, the couple’s daughter, said.

Now with five children, 14 grandchildren and 16 great-grandchildren, Ann and John continue to show their love to each other.

“Your love grows, you know,” Ann Betar said in a video interview. “Grown in very good direction for the two of us.”

As a couple, John and Ann enjoy reading together, cooking and maintaining a moderate diet. According to John, there’s nothing too complicated because love and commitment have kept them together.

“We just live with contentment and don’t live beyond our means,” John Betar said. “Just go with the flow.”

Both John and Ann expressed their gratitude for the chance to spend such a long time together.

“We are very fortunate. It can be repeated and repeated,” Ann said in an interview with ABC News. “It is unconditional love and understanding. We have had that. We consider it a blessing.”

Daughter Renee agreed, stating: “Their decision to marry reinforces the strength of their love and their determination to be together. It’s no big deal being married 80 years when you’re in love.”

A photo of John and Ann has recently circulated on Facebook, celebrating their achievement. The picture has more than 13,000 comments, 21,000 shares and 619,000 likes.

Donna Aldridge commented, “Now that’s how life should be! What a sweet picture — still holding hands. I love it!”