Anambra state – On Saturday, Nov 16, 2013, residents of Anambra state will decide who would be in charge of their affairs for the next four years. 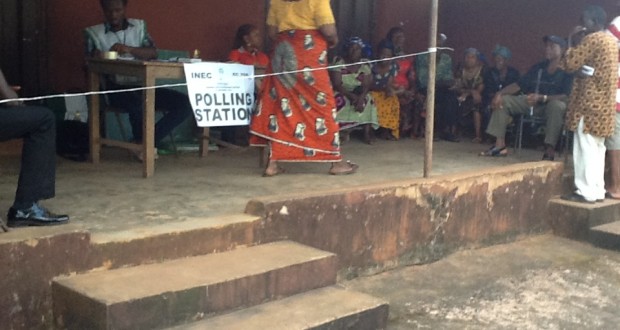 It is worth noting that accreditation, which was to commence by 8 a.m., has not yet started in a variety of locations when visited at 9 a.m.

Voters were patiently waiting for voting materials to arrive at a unit in Ogbankwa, Awka South Local Government Area, where there are 20 wards.

At Unit 26 in Ward 3, Ezinano, Agulu LGA, accreditation begun at about 9.30a.m., with three persons accredited by that time.

INEC Public Relations Officer Frank Egbo said there had not been reports of any major challenges from the staff. According to the information they received, he added, the accreditation has begun in various polling units.

Egbo said he was not aware of reports that election materials were snatched at Orumba while being transported there.

Meanwhile, the no-movement order given by the Inspector General of Police, Mohammed Abubakar, has started taking effect with security check points mounted in parts of Awka, the state capital.

The closure of all Anambra borders from 5pm yesterday [November 15] to 4pm tomorrow [November 17] is supposed to control the rumoured influx of strangers from the neighbouring.

Over 3,000 policemen have been deployed for the election taking place in 4,608 polling units in 326 political wards in the 21 local government areas.

A new governor would put an end for Governor Peter Obi’s eight-year rule in the state.

Anambra State has the record of being the only state that has produced four governors within the space of four years (between May 29, 2007-2011). Chris Ngige was removed by a court for not winning the 2007 elections, despite the announcement of INEC; he was replaced by Peter Obi; Dame Virginia Etiaba, Obi’s former deputy, was sworn in after the removal of Governor Obi by the state house of assembly; and, lastly, Senator Andy Uba, who won the 2007 elections.