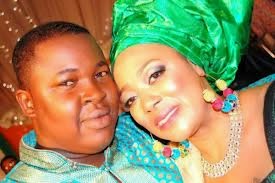 Reports have it that the couple, whose marriage is barely two years old parted ways due to irreconcilable differences.

Baba Tee was recently a guest on a local TV station, TVC, and whilst answering questions on his marital status he denied his wife on National TV saying he has never been married and even showed his ringless finger to confirm it.

It was gathered that Baba Tee has stopped putting on his rings to events, as he has been spotted without it on numerous occasions recently.

According to close sources, the marriage was doomed from the beginning as Yetunde, a divorcee and much older and wiser woman, was not the right choice for the young man.

However, those who know the actor well, labeled him as a liar because his London based lover, Yetunde Oduwole is well known to his friends and family.