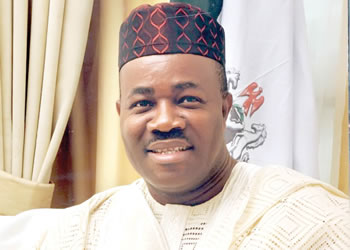 Gov. Godswill Akpabio of Akwa Ibom on Monday in Abuja said the Group of Seven (G7) governors were at liberty to leave the Peoples Democratic Party (PDP) if they felt aggrieved.

He spoke to State House correspondents at the launch of the third phase of the Youth Enterprise with Innovation in Nigeria (YouWiN) programme by President Goodluck Jonathan at the Presidential Villa.

Akpabio, who is the Chairman of the PDP Governors Forum, was reacting to reports that the governors were fine-tuning arrangements to dump PDP for opposition party.

The governor said that leaving one political party for other was a normal thing for politicians.

He, however, warned that leaders who leave one party to the other should be aware that their followers might not follow them.

“I do not see a problem in the issues of certain politicians wanting to change party. It is a normal thing in politics that people move from one political party to the other.

“But what is important is that we move on and the country moves on.

“PDP is very big and robust enough with its branches in 774 local government areas in Nigeria. If you have five persons moving away from PDP, you have 10 to 50 moving into PDP.

“Right now, there are so many APC members who are approaching me on a daily basis that they want to move into PDP.

“But I keep telling them that it is not yet time, let us resolve this issue of G7 governors and then you see the big fishes that will come out of the APC.

“They are ready to come out and when they come out, it is going to be a boom. The entire country will shout’’, he said.

The governor pointed out that he was not opposed to the ongoing dialogue with the President to end the crisis.

He, however, warned that the aggrieved members should not capitalise on the President’s humility and patience to continue to waste his time and distract him.

“There must be an end to the dialogue so that the President can concentrate on the work he was voted into office to do’’, he said.

The Governors who had been at loggerheads with the leadership of the party include Rotimi Amaechi (Rivers), Abdulfatah Ahmed (Kwara), and Babangida Aliyu (Niger).