Home Politics APC Not About Me, Buhari Or Any Of Its Leaders, Says Tinubu
Facebook
Twitter
WhatsApp 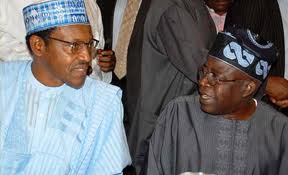 Former Lagos State governor, Asiwaju Bola Ahmed Tinubu yesterday declared that the All Progressives Congress, APC, is bigger than any individual, including himself and former military head of state, Gen. Muhammadu Buhari.

Buhari and Tinubu have often being touted as the soul of APC and the major force binding the opposition party together, but the former Lagos governor debunked that insinuation insisting that the party is essentially about Nigerians and how they can come together to rescue the country from what he termed ‘inept’ leadership.

He spoke to reporters in Bwari, Abuja on the sideline of the 2012/2013 Call to Bar ceremony of the Nigeria Law School while responding to a question about the significance of the five former Peoples Democratic Party, PDP governors joining APC and the implications for Nigeria.

“The APC is not about Tinubu, Buhari or any of its leaders. It is about the nation and how we can come together and work together to rescue Nigeria from inept leadership. The implication is change,” he said.

The APC leader added that, “We want to change the way things are done by working together and investing our ideas. We must change the way we do things. Imagine from the 60’s till date. The cutlass of the 60s cannot be used for farming now. We need leaders that can think outside the box’’.

Describing Nigeria as a blessed nation with talented youths whose potentials must be harnessed for the development of the country, Asiwaju Tinubu said Nigeria needs a democratic revolution that will unleash infrastructural development and massive industrialization.

“The lamentations must stop. After so many years of lamentation with action, we must lead the new resolve to rally for the much needed change our country badly needs’’, Tinubu said, and condemned the hardline stance of the Federal Government to the lingering strike by members of the Academic Staff Union of Universities, ASUU.

Specifically reacting to the December 4 deadline given to the striking lecturers to return to their classrooms or risk losing their jobs, he said: “We are not in a military era. The language used shows a government out of tune with the general feelings of Nigerians.

“Nigeria cannot afford to continue to lose her best brains to the diaspora’’.