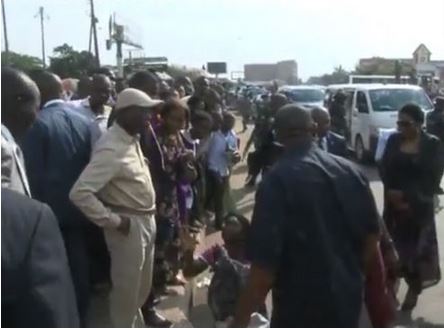 The Interim National Publicity Secretary of the All Progressives Congress (APC), Alhaji Lai Mohammed, has defended the actions of Edo State Governor, Comrade Adams Oshiomhole, who came under massive tongue-lash from generality of Nigerians following his comments, which he has since regretted and apologized, that a widow should ‘go and die’.

A video which went viral during the week, showed an unmoved Gov. Oshiomhole, about a fortnight ago, ordering the seizure of some goods belonging to a woman, who was allegedly hawking her wares on the side-walks, in contravention of existing traffic laws, even as she went on her knees, crying and begging for mercy on grounds that she was a widow.

Her claim that she was a widow only seemed to anger the governor, who retorted, “you are a widow, go and die”.

But this statement did not go down with Nigerians both within and outside the country as they decried the governor’s attitude especially, as he was once a union leader, who fought for the rights of the poor and downtrodden in society when it was being trampled upon by government.

However, commenting on the episode while speaking on Channels Television’s breakfast programme, Sunrise, on Saturday, Mr Mohammed said “running a state is not about popularity but about doing the right thing.

“In doing so, you are probably going to step on certain toes,” he said, adding that his experience in government gives him knowledge that harsh decisions will be taken.

But when asked if the Governor’s comment was justified, the APC spokesman responded, “No. I’m just saying that in some circumstances, you take decisions which are very unpleasant”.