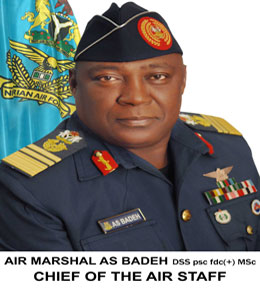 The Chief of Air Staff, Air Marshall Alex Badeh said yesterday in Makurdi, Benue State, that the activities of terrorist group, Boko Haram have nothing to do with religion and that the Air force would not compromise in its dealings with the insurgents.

The CAS, who spoke during the opening ceremony of Air Warrant Officers/Regimental Sergeant Majors and senior non-commissioned officers workshop held at the NAF base in Makurdi, urged his men to combat the insurgents without bias to religion.

“Boko Haram has no religious coloration. So whether you are a Muslim or Christian in the Air force, you must defend the peace of the country,” he said.

He stressed the need for the men and officers of the Nigerian Air force to do their jobs with strict adherence to the Nigerian constitution.

He also used the occasion to disclose that the force would soon unveil GULMA Unmanned Aerial Vehicle, which is West Africa’s first indigenously developed ‘drone’ to support security operations in the country.

Speaking earlier, the Chief of Administration, AVM Nicholas Spiff, reiterated the leadership’s resolve to transform the Air force into a self-reliant and highly professional fighting force through the application of innovative technology.