There have been indications that after Monday’s meeting between President Goodluck Jonathan and the Academic Staff Union of Universities (ASUU), the four month strike of the lecturers may finally end. As of 12.30 am (Tuesday), the meeting was still ongoing. The FG is reported to be desperate to work out an agreement with ASUU. 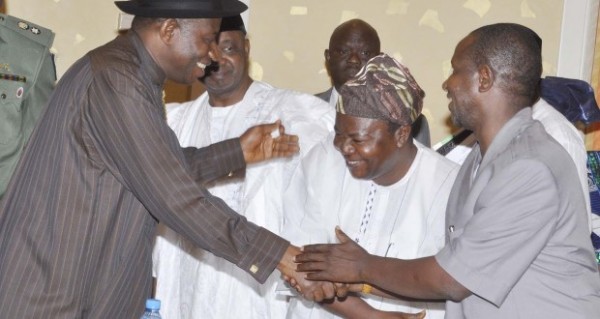 A closed-door meeting has started on Monday at 2:40 pm inside the First Lady Conference Room, Presidential Villa, Abuja. The parties are still negotiating, as of 12:30 am (Tuesday).
Indications that the strike which is now into its 5th month may be resolved have emerged when the President stated, while shaking hands with ASUU Chairman Dr. Nasir Isa Fagge:

“My president, I hope it will end today. Our children have suffered enough. We must find a solution.”

All those in attendance responded with a loud “amen.”

“My president with you around today, there will be no problem, our agreement is signed, sealed and delivered.”

This is the first meeting between the lecturers and Jonathan since the beginning of the strike. The Presidency took over negotiations with the striking lecturers September 19, with the Vice-President Namadi Sambo spearheading the FG side.

The lecturers were seen meeting among themselves in their bus during the break that has started at 6.30 pm. When State House correspondents tried to talk to the lecturers, some of them replied that they would return to continue their discussions with the President. No details of there discussion have been yet made known.

Apart from Fagge and Jonathan, the meeting has in attendance the President, Vice President, Namadi Sambo; Minister of Finance, Dr. Ngozi Okonjo-Iweala; Secretary to the Government of the Federation, Pius Anyim; Supervising Minister of Education, Nyesom Wike; and Minister of Labour, Emeka Wogu among others.

The ASUU is presented by Prof. Abdulahi Sule-Kano, Prof. Dipo Fashina and Prof. Festus Iyayi, Prof. Suleiman Abdul, and Prof. Abdullahi Sule-Kano. President of the Nigeria Labour Congress, Abdulawahid Omar and that of the Trade Union Congress, Bobboi Kaigama, are also there.

Preparatory to the meeting, Senate President, David Mark met with the leadership of ASUU at the National Assembly. He regretted that the strike had lingered for the past five months, and called for a win-win resolution to the industrial action. He then led the Union’s representatives to the Presidential Villa after the meeting.

ASUU has embarked upon an indefinite strike July 1, 2013. The lecturers protest against an alleged FG’s failure to honor an agreement signed between the FG and ASUU in 2009. 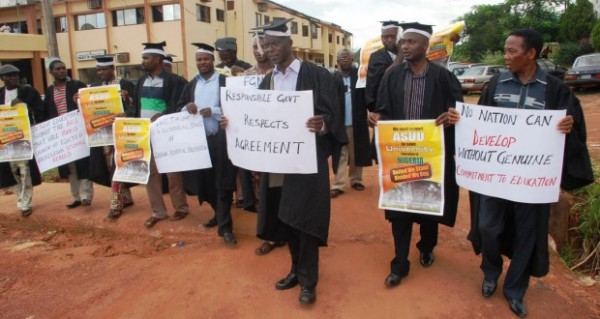 Part of the agreement dwelt on funding of universities where both parties agreed that each federal university should get at least N1.5 trillion between 2009 and 2011 while state universities, within the same period, should receive N3.6 million per student.

The agreement was signed by Bolanle Babalakin, the then chairman of Committee of Pro-Chancellors of Federal Universities; Gamaliel Onosode, chairman of the re-negotiation committee; and Ukachukwu Awuzei, the then president of ASUU.

It is still unclear, however, how much of the agreement have been met by the FG. The secretary to the federation, Pius Anyim, has recently stated that most of the issues contained in the 2009 document had been fully met except for the earned allowances estimated at N92 billion.

We will keep you updated…