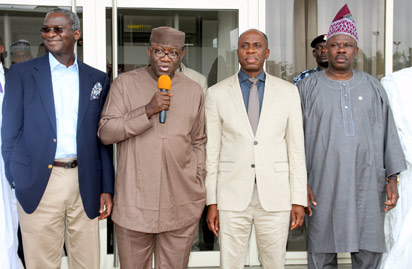 Ahead of their rescheduled meeting on Tuesday with Governor Rotimi Amaechi, leaders of the All Progressives Congress (APC) have arrived in Port Harcourt, Rivers State.

It would be recalled that the APC leaders could not meet with the Rivers governor as earlier planned due to what was termed ‘logistics’ problem.

It was learnt that Gov. Amaechi, who alongside other members of the G-7 governors met separately with former President Olusegun Obasanjo in Abeokuta; former head of the Interim National Government, Chief Ernest Shonekan and former Defense Minister, Theophilus Y. Danjuma in Lagos yesterday, arrived Port Harcourt on Tuesday morning and headed straight home before returning to receive the visiting APC leaders.

At the main gate of Port Harcourt’s airport Omagwa, policemen prevented the governor’s supporters from joining the rally which forced Amaechi to ditch his convoy and trek about four kilometers accompanied by a crowd of supporters, to the airport.

He later spoke with reporters at the airport VIP Lounge.