The  total sum of N375m used to purchase bulletproof cars for the Minister of Aviation, Ms Stella Oduah, can build 150 classrooms, calculations by Sunday Punch have shown. 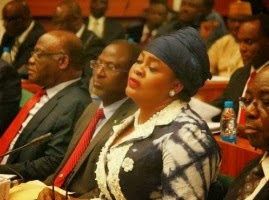 The sum can also pay the monthly wages of 20,833 workers, based on workers who receive the N18,000.00 minimum wage approved by the National Assembly.

The sum of N255m was spent by the Nigeria Civil Aviation Authority to buy two bulletproof BMW cars for the Minister of Aviation, Ms. Stella Oduah, and the Federal Airport Authority of Nigeria, also reportedly bought her two bulletproof Lexus Limousines at N120m, bringing the total  amount, revealed so far, to N375m.

It also means that the cost of the cars can put food on the table of over 20, 000 Nigerian families within a period of one month.

Apart from wages, the money can provide infrastructure such as health care facilities, schools, correctional centres, resettlement camps, among others.

While facing the House of Representative Committee on Aviation, Oduah denied that the vehicles were bought for her, but neither her nor the heads of NCAA, FAAN have denied the amounts spent on them.

According to a quantity surveyor, who did not want to be named, about N15m could build a block of six classrooms, while about N10m could raise the structure of a paediatric ward in a hospital.

Going by that estimate, if the price inflation that characterises government projects is eliminated, N375m can build 150 classrooms in public primary or secondary schools, and at least 37 wards in public hospitals.

A professor of economics, Sherifdeen Tella, told SUNDAY PUNCH that wastage of public fund in purchase of those vehicles was made worse by the fact that the vehicles were imported, creating jobs for people in other countries.

He said, “If that money had been invested in something produced in the country, it would have helped to generate employment.

“Spending such amount of money to import the cars that we don’t need is only creating jobs for other countries and killing jobs in Nigeria. If that money was injected into agriculture or used to help small-scale businesses at least, it would have benefitted Nigerians.”

Tella, who was the Vice-Chancellor of the Crescent University, added that wasteful spending such as the purchase of the cars had led to Nigeria becoming cash-strapped.