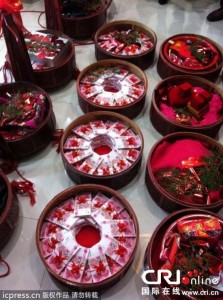 A wealthy Chinese suitor has attracted accusations that he is buying a wife rather than marrying one, after he gave his future bride 18 baskets full of money, as an engagement present. According to Chinese media, the baskets were stacked with 8.88 million Chinese yuan ($1.45 million) and weighed over 102 kilograms.

When it comes to romance, nothing says “I love you” like stacks of beautifully-decorated money. At least that’s what Meng Huang, the son of a rich construction magnate in China, seems to think. The 27-year-old filled 18 traditional gift baskets with cash and employed 18 people to deliver them to his bride-to-be’s home, as a token of his love for her. “This is how we do things here,” Huang said. “She is worth the whole world to me and I wanted to prove that with a world gift of cash”. The eccentric gift arrived at its destination in a fleet of luxury vehicles lead by a Maserati sports car, where it was gladly accepted by the bride’s family. The stacks of red 100 yuan bills depicting Communist founding father, Mao Zedong, were decorated with red ribbons and neatly arranged in the gift baskets for everyone to see. The sum, 8.88 million yuan was obviously not accidental, but carefully chosen, as the word for “eight” is linked with the meaning “wealth” in Chinese.

Huang’s fiancee, Lin Sun, who also hails from a wealthy family, was apparently very pleased with her husband’s gesture, basking in all the attention she got from everyone present.  Although some sources claim such gifts are perfectly acceptable, and even encouraged in China, the reaction of Chinese internet users at the sight of the money-filled baskets contradicts this idea. ”It’s not so much marrying a wife, but buying one. If they really loved each other, there would be no need for such extravagance,” one Weibo user wrote. ”They’re cheapening the value of both marriage and themselves,” another one added.