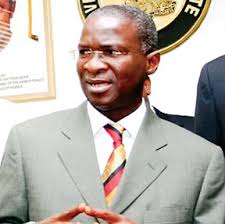 Governor Babatunde Fashola of Lagos State has explained why it appears difficult for certain political office holders to implement the existing national minimum wage of N18,000 for workers across board

The governor made this known in Lagos on Thursday, while speaking at the 5th Nigeria Leadership Conference (NLC) tagged “The Christopher Kolade Symposium”.

Fashola also said that it would be difficult for leaders to succeed without the support of the followers and urged Nigerians to always support their leaders in efforts to execute development projects and deliver the dividends of democracy.

The governor urged the citizens not to think about their rights all the time, saying that they should instead aid and initiate efforts aimed at propelling the country to greater heights.

“I don’t have a problem with citizens asking for their rights but they should also know that rights come with a lot of responsibilities.

“We should ask ourselves if we are paying our taxes promptly, whether we are obeying the laws. These are some of the things required of us as good followers.

“So, when we are asking for our rights, we must also strive to fulfil these obligations”, he said.

On the difficulty experienced by some states in paying the national minimum wage, Gov. Fashola argued that the national earnings has never increased by 80 per cent in apparent reference to the same percentage increment in the minimum wage from N10,000 to N18,000.

“No society in the world can increase minimum wage by 80 percent. From N10,000, you asked that we should be paying N18,000, that is an increment of 80 percent. But I asked; has there been any time our earning has increased by 80 percent? It is even possible because our economy is driven by the extractive industry and not by taxation. But it is not possible for everyone to earn the same salary and wage because not everyone is doing same amount of work. It is not the same effort that is put in,” Fashola said.