An Indian couple have been jailed for life for slitting the throats of their 13-year-old daughter and a servant after finding them in an “objectionable” situation. 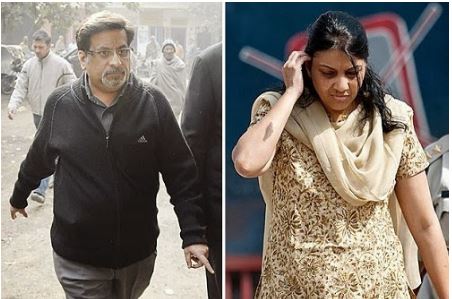 Rajesh and Nupur Talwar were accused of killing teenager Aarushi and their domestic servant Hemraj at their New Delhi home in May 2008.

After a long-running case that has gripped the country, the couple broke down in court yesterday after they were found guilty.

Today the prosecutors had asked for the death penalty against the pair, who are both dentists and claim they are victims of police incompetence.

The couple will appeal against the guilty verdict handed down by the same local court on Monday.

Aarushi was found dead in her bedroom on May 16 2008, just a few days before her 14th birthday.

The body of 45-year-old Hamraj, who had worked for the family for 10 years, was found on the roof of the house the following day.

Both had had their throats cut, and been beaten with golf clubs.

Early in the investigation, police alleged Rajesh had murdered Aarushi and Hemraj in a rage after finding them in a compromising situation.

It was the kind of crime more often associated with rural parts of India where “honour killings” are not uncommon than with a successful, middle class family living near the capital – helping to explain the huge interest it has generated.

The Talwars deny the murder and blame sensational media coverage for demonising them and damaging their defence.

The Talwars’ lawyers highlighted the lack of hard evidence.

One of them, Rebecca John, told the CNN-IBN news channel: “This is nothing but a witch hunt.”