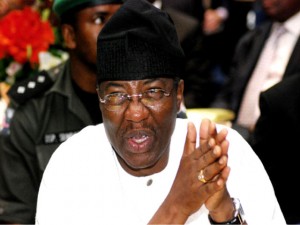 The former governor was arraigned before the court by the EFCC for alleged fraudulent conversion of land and diversion of public funds.

The trial judge, Justice Olarenwaju Mabekoje said that the adjournment was to enable the Court of Appeal to deliver judgment in an appeal on its ruling delivered on January 8.

Daniel filed the appeal at the Court of Appeal, Ibadan, challenging the dismissal of his plea to quash counts 1-13 of the 38 charges levelled against him by the EFCC in the subsisting suit.

At the resumed hearing, counsel to Daniel, Mrs. Titilola Akinlawon, informed the court that her client’s appeal had been argued at the Appeal Court and that judgment had been reserved.

She pleaded for an adjournment to a date exceeding January 28, 2014, “when the judgment would have been given in respect of the appeal.

The case was consequently adjourned till Feb. 6, 2014 for continuation of trial.