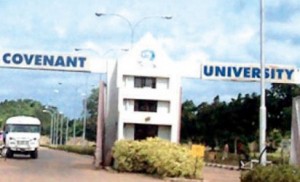 Covenant University, a private institution, has developed a software that can help to check the menace of illegal possession of arms and its proliferation in the country.

It was on display at an exhibition organised by the Nigerian Air Force (NAF) Research and Development centre to showcase NAF’s efforts in equipment maintenance and management, in Abuja on Tuesday.

The Deputy Vice-Chancellor (Academic) of the institution, Prof Aderemi Atayero, who presented the product, said the software had a human tracking capability and could be useful to security agencies in the country.

Atayero said the software was developed at the university in August and was the result of the institution’s efforts in the area of research and development.

According to him, the technology is already in use at the university to track the movement of staff and other key members of the university community.

In her remarks at the event, the Minister of Communication Technology, Mrs Omobola Johnson, reiterated the commitment of the present administration to support innovations by the nation’s armed forces.

Johnson said that the modernisation and re-equipping of the armed forces were of top priority to the present administration, hence its emphasis on training and re-training of its personnel.

According to Johnson, the acquisition of new and modern platforms for the armed forces and training of its personnel to handle such platforms, clearly explained government’s commitment to the armed forces.

The minister said the effort to develop local capacity to maintain some of the platform and equipment was a welcomed development and should be emulated by other agencies of government.

Earlier, the Chief of Air Staff, Air Marshal Alex Badeh, said the exhibition was put together by the reinvigorated NAF Research and Development Centre to encourage its internal mechanism for repairs and maintenance of its equipment and aircraft.

He said that the new approach was adopted to address challenges associated with the rising cost of aircraft maintenance.

According to Badeh, NAF cannot afford to be dormant, it must strive to remain relevant even as the cost of maintenance of its platforms and equipment continue to increase.

Badeh called on other agencies of government and research institutions to collaborate with NAF to achieve its mandate in spite of the dwindling resources allocated to it.

The six commands in the Nigeria Air Force and its Kaduna-based Institute of Technology showcased some of their research works at the event.

The Training Command, Tactical Air Command and the Logistics Command took the first, second and third positions respectively at the end of the exhibition assessed by some experts.

The event was attended by the Supervising Minister of Defence, Mr Labaran Maku, some legislators, service chiefs and the Inspector-General of Police.

Other institutions that participated at the one-day exhibition included, the University of Lagos, Federal University of Technology, Minna and the Covenant University, Ota.