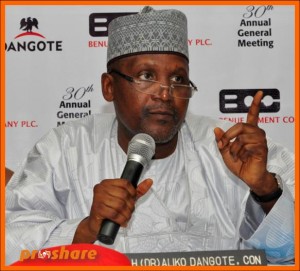 The President and Chief Executive of Dangote Group of Companies, disclosed this after a meeting with the state’s Deputy Governor, Professor Modupe Adelabu at his Falomo, Ikoyi, Lagos Office, Friday.

In a statement by Professor Adelabu’s media aide, Mr. Bunmi Ogunmodede, both parties described their discussions as very fruitful after the meeting, which held behind closed door.

Dangote who disclosed what went on behind closed doors said: “I have had a very good discussion with the deputy governor and we are looking at the areas of solid minerals. We are also looking at the area of rice production, which is agriculture.

“We will engage more of the local population in farming activities and this will create employment opportunities for the people.

“So, we will look into this and the possibility of collaborating with the state through the Ministry of Agriculture.

“I am also looking in the area of education. I have had a very fruitful discussion with the professor and we will take it up from there,” Dangote said.

According to him, the Ekiti governor deserves all the necessary support to push through his vision for the people of Ekiti State.

“Ekiti people and Nigerians should allow him to continue with the great job that he has been doing.

“He (Fayemi) has not disappointed anyone of us, who are his friends because we believed he went into politics on a mission and he’s doing very well.

“My advice to Ekiti people is that they should give their governor and his deputy all the support they require to succeed. They are a great team and I wish them the very best,” Dangote said.