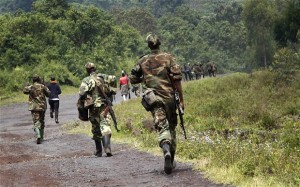 The Democratic Republic of Congo’s M23 rebel group has declared an end to its 20-month rebellion, saying it is ready to disarm and demobilise troops and pursue a political solution to end the crisis in the east of the country.

The M23 declaration was issued hours after government forces drove the rebel fighters out of their last two strongholds at around 3am local time (00:00 GMT) on Tuesday. Analyst call the rebels’ declaration a smart move to ensure they don’t lose totally.

African leaders had urged the group to renounce their rebellion to allow the signing of a peace agreement with DRC President Joseph Kabila’s government.

“The chief of general staff and the commanders of all major units are requested to prepare troops for disarmament, demobilisation and reintegration on terms to be agreed with the government of Congo,” M23 leader Bertrand Bisimwa said in a statement.

“In a region that has suffered so much, this is obviously a significant positive step in the right direction,” Russell Feingold, US special envoy to the Congo and the Great Lakes region, said at a briefing in Pretoria.

Envoys monitoring the conflict for the UN, EU and the African Union urged both sides on Monday not to undo progress made in peace talks, saying M23 should renounce its rebellion as agreed and the army should hold off from further military action for now.

The UN special force in the DRC said it fired mortar rounds at M23 rebels on Monday, in what appeared to be its first direct combat against the rebellion since a resumption of hostilities last month.