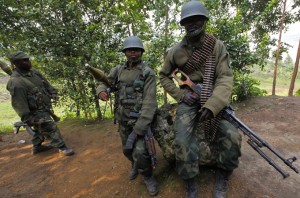 The rebel surrender follows a crushing defeat at the hands of the UN-backed Congolese armed forces.

“He is with our forces, yes, Makenga has crossed into Uganda,” a senior Ugandan military officer told AFP news agency, although he declined to clarify if he had formally surrendered or was under arrest.

Makenga, 39, a former colonel in the DR Congo army, is accused of masterminding killings, abductions, using rape as a weapon of war and recruiting child soldiers, and is on both UN and US sanctions lists.

A colonel in the Ugandan army, Paddy Ankunda, told AFP news agency on Thursday that 1,500 men from the M23 – a number thought to account for almost the entire force – had crossed into Uganda and given themselves up, and were now being held in the Kisoro border district.

“About 1,500 fighters surrendered today,” said Ankunda, the spokesman for the Ugandan defence minister Crispus Kiyonga, a mediator in stalled peace talks between M23 and Kinshasa.

However, Ankunda said he was “not aware” if Makenga was among those to have surrendered.

Uganda has been accused by United Nations experts of backing the M23. Those claims are strongly denied by Kampala.