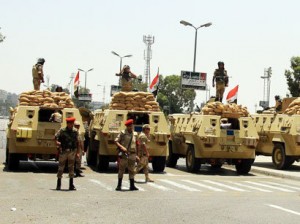 Egypt’s government has announced the end of a three-month state of emergency, two days earlier than planned, with a court ruling that the measure has expired.

Ending the state of emergency would mean the end of a night time curfew also in place since mid-August, measures aimed at helping authorities impose control amid protests by supporters of ousted President Mohammed Morsi.

Security officials have shown concern that its end could add fuel to the protests.

Morsi, who has been in detention since his July 3 ouster by the military, had his first extensive meeting with lawyers on Tuesday, consulting in prison with a team from his Muslim Brotherhood and allies on his ongoing trial on charges of inciting murder.

Morsi is so far refusing to allow the team to represent him, saying he remains the elected president and refuses to recognise the tribunal against him following what he and his supporters call an illegal coup.

During the meeting, Morsi gave the lawyers a “statement to the nation and the Egyptian people”, said Morsi’s son, Osama, a lawyer who was among those who met him, according to the Muslim Brotherhood’s website.

He said the statement was addressed to “the various movements, factions and sects” of the Egyptian people.

The lawyers planned a press conference for Wednesday, when it appeared the statement would be released.

The court ruling on ending the state of emergency appeared to have caught the government off guard.

Only a day earlier, Interior Minister Mahmoud Ibrahim had said it would be lifted on Thursday, announcing that security reinforcements would deploy in the streets at that time – a sign of the worries over intensified protests.

The confusion came because the state of emergency was initially announced for a month on August 14. But the government renewed it for another two months on September 12.

The court on Tuesday said that means it ends on November 12.

The Cabinet put out a statement saying it will abide by the ruling, though it said it will wait for the court to issue the verdict in writing. It was not clear what would happen if that did not happen on Tuesday.

It was imposed after police broke up two pro-Morsi protest camps in heavy crackdown that left hundreds of protesters dead.

The country has seen persistent violence since, including further bloody crackdowns on protests, retaliatory violence blamed on Islamists, and a wave of attacks on security forces and the military by Islamic militants, mainly in the Sinai Peninsula.