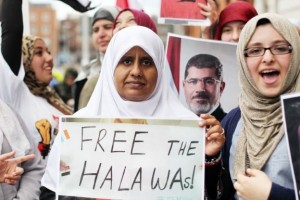 A group of twenty-one women have been jailed for 11 years for a peaceful protest in Alexandria, as Egypt’s interim prime minister gave a strong defence of a law further restricting public demonstrations.

The women, supporters of the deposed president Mohamed Morsi, received 11-year jail sentences on Wednesday for forming a human chain and passing out flyers earlier this month. Seven minors among the group were remanded to juvenile detention until they reach legal age. The youngest in the group is 15 years old.

Six men, described by prosecutors as Muslim Brotherhood leaders, were sentenced to 15-year terms, accused of being members of a “terrorist organisation”.

In a news conference also on Wednesday, Hazem el-Beblawi, the interim prime minister, defended a new law which requires citizens to apply for permission before marching as a “necessary step”.

“The cabinet confirms that it will apply the law fully to show its support for the police in the face of terrorism. The law is subject to change, but through the proper channels.”

Protesters opposed to both Morsi and the interim army-backed government meanwhile gathered in downtown Cairo for a rally against the law.

Unexpectedly, the interior ministry announced that it had approved the march, even though organisers denied applying for a permit.

The ministry said the application was submitted by the father of Salah Ahmed Mohamed, known as “Jika”, the first protester killed during deposed Morsi’s tenure.

Wednesday’s rally was only announced in the morning, giving far less than the required period of notice.

The backlash against the law is the latest criticism of Beblawi’s increasingly unpopular government. Even some supporters think it went too far in restricting personal freedoms: Leaders of Tamarod, the petition campaign that organised the protests that preceded Morsi’s ouster, have criticised the law as too harsh, and several were arrested while protesting against it on Tuesday in the southern city of Aswan.

“They had one party against them already, the Muslim Brotherhood,” said Magdi Hussein, a campaigner from Tamarod who attended Tuesday’s protest. “I don’t know why they passed this law. It will turn another group against them.” [AlJazeera]