Goals often define the greatness of a striker and as such Nigeria international Emmanuel Emenike has planted himself firmly at the top of the current crop of Super Eagles stars, and the 26-year-old tells FIFA.com that he hopes to score a lot more of them for club and country.

Co-top scorer at the CAF Africa Cup of Nations earlier this year as Nigeria won their third continental crown, the Fenerbahce striker also scored two vital goals in Ethiopia last month in the FIFA World Cup qualifier. The 2-1 advantage heading into the home leg has Nigeria’s expectant supporters feeling comfortable about their chance of playing in their fifth, all of which have come since 1994.

Success in the AFCON in South Africa has lifted the mood of the team, but the powerfully built centre forward has his eyes firmly planted on Brazil. “I am glad to have played in the Nations Cup and won, but I am dreaming of playing in my first World Cup for Nigeria. That will be the first time I will be at the World Cup and to get to play in Brazil, where they are crazy about football, would be a dream come true.”

However, Emenike, who got his break with the national team after he was recommended to then-coach Samson Siasia by skipper Joseph Yobo, insists that the return leg this weekend in the coastal town of Calabar will not be a walkover simply because Nigeria won the first match and have not lost to the Walya Antelopes in two decades. “The game in Calabar will be tougher for us than the one in Addis Ababa. We have to be careful and get ready for another big business in Calabar,” he said citing the possibility of a let-down.
“Ethiopia are very good and they will be coming here with more tricks. So, we shouldn’t see the first victory as the end of road.”

A tale of two legends
Emenike says that his first real memory of the World Cup was in 1994, when Nigeria made their finals debut in the United States. An exciting run led by the likes of Rashidi Yekini, Daniel Amokachi, Sunday Oliseh assumed legendary status as the Africans came within minutes of reaching the last eight at the expense of Italy.

Emenike has been widely compared to Yekini, who holds legendary status in the country and remains the all-time national team record scorer with 37 goals in an international career spanning over 14 years. The all-action Fenerbahce striker is on nine goals since his debut in February 2011 and he has insisted he has a long way to go before he could be spoken of in the same breath with ‘Ye-King’.
“Rashidi Yekini’s shoes are still too big for me to wear. I am only trying to do what I know is best for my fatherland, and I have not done anything yet,” he maintained. “I still have a lot to do to get to the heights reached by such a legend.” 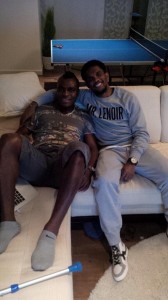 Incidentally, it was another top African great, Samuel Eto’o, who Emenike credits for giving him a lift at Fenerbahce after he went seven games without a goal in Turkey. Like Emenike, who played for Spartak Moscow, Eto’o departed Russia in the summer and was also struggling at his club, English Premier League giants Chelsea, before he finally broke his duck against Cardiff City in October.
“I was lifted when I watched Samuel Eto’o celebrating his first goal for Chelsea after he had gone some games without a goal,” said Emenike, who scored his first goal for Fenerbahce at Erciyesspor the following day. “[Eto’o] is a friend and a brother. We have the same vision and wear the same jersey number too.”

Emenike’s Istanbul club are top of the Turkish Super League, and he has now scored four times.Nigeria coach Stephen Keshi and the side’s fans are hoping that his rich scoring form will continue against Ethiopia and all the way through to Brazil 2014.