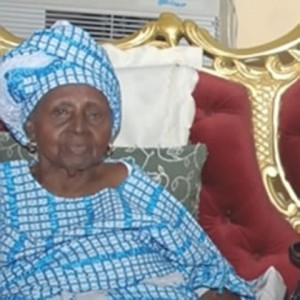 In a statement by his spokesperson, Mrs. Funmi Wakama, Amosun said Awolowo “remains a source of inspiration to all, as generations upon generations continue to draw from her wealth of experience.”

According to him, despite her old age, the nonagenarian has continued to harp on an egalitarian society, a nation of equity, justice and fairness.

Also wishing the nonagenarian a happy birthday was former Ekiti State Governor, Chief Segun Oni, who described Awolowo as “the real conscience and mother of the Yoruba nation.”

In his congratulatory message to her, Oni said: “Mama’s untiring efforts at building and sustaining the unity of the Yoruba nation and ensuring its worthy pride of place within the context of Nigeria’s federal structure is commendable.

“We are particularly happy that in spite all challenges, Mama has remained undaunted in her commitment to the unity and wellness of the Yoruba race.”