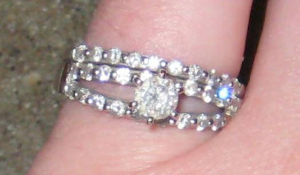 A Kansas woman who put up a Craigslist ad offering an engagement ring and a wedding band in exchange for Chiefs-Broncos tickets announced she has found a buyer.

The Overland Park woman, who wanted to remain anonymous, posted a Craigslist ad last week offering to trade the two rings from a previous marriage, which include a wedding band and a diamond engagement ring featuring a .45-carat brilliant cut diamond, for tickets to the Kansas City Chiefs-Denver Broncos game Dec. 1 in Kansas City, The Kansas City Star reported Friday.

“It’s official! I have tickets to the game!!!” the woman said Thursday in an email to The Star and other news organizations. “We met at a jewelry store so they could verify the ring was real and matched the appraisal I had provided him.”

The purchaser, Rusty Jones, 49, said he discussed the ad with his girlfriend and responded to it, but the seller lost his contact information accidentally. He said the ad was reposted and he was able to get back in touch with the woman and arrange a purchase without his girlfriend’s knowledge.

Jones said he is planning a surprise proposal during a Sunday party at his house.

The seller, who said the rings were from a previous marriage, said she plans to present the tickets to her husband as a 40th birthday present.