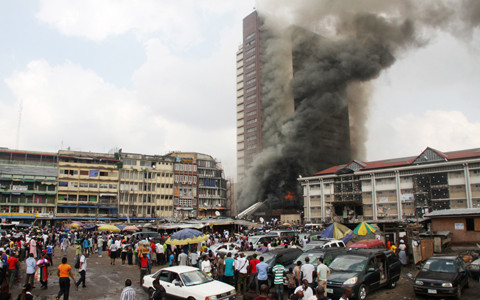 Hundreds of tenants and traders wept on Monday as fire engulfed the Great Nigeria House along Martins Street on Lagos Island, which served as their offices and warehouses.

The News Agency of Nigeria (NAN) reports that the fire brought commercial activities in the Balogun area of Lagos Island to a standstill.

NAN reports that many of the traders were seen scrambling to salvage few of their goods from the burning building.

The 22-storey Great Nigeria House acclaimed as the fifth tallest building in Nigeria accommodates Mainstreet Bank and also served as warehouses to some traders.

According to an eyewitness, the fire started at about 5.00 a.m. and was first noticed on the first floor.

The eyewitness told NAN that the Federal Fire Service was quick to respond to the distress call of traders and more than five fire engines were lined up to battle the blaze.

NAN, however, observed that lack of adequate access to the building hampered the activities of the firemen as the building was surrounded by some other shopping plazas.

A staff of Mainstream Bank, who pleaded anonymity, told NAN that there was nobody in the building because the fire started before resumption of work.

Efforts to get the situation report from the officials of the Fire Service proved abortive as they were still battling to put out the fire.

An official of the fire service, who spoke with the agency in a rush, said the cause of the fire could not be ascertained yet, but that traders had been told to vacate the neighbouring buildings.

NAN also reports that as at 11:00 a.m., the firemen were able to contain the fire and also prevented it from spreading to other floors and shopping plazas around the skyscraper. (NAN)