Home Entertainment Foluke Daramola: “I Won’t Leave My Hubby Even If He Impregnates Another...
Facebook
Twitter
WhatsApp 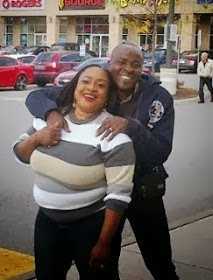 This article interview caught my eye because, those were the similar words of Jada Pinkett about her husband Will Smith, till the sex scandal with another woman hit the news; next thing, Jada Pinkett is seen walking around without her wedding ring.

Anyways, popular Nollywood actress, Foluke Daramola-Salako married top Lagos socialite, Kayode Salako in a very controversial way, which later turned messy as she was alleged to have snatched the handsome school proprietor from his ex-wife, Bukola.

However, a family friend of the new couple later alleged that the Ekiti State-born make-believe queen used occultic means (jazz) on Kayode, a claim Foluke and reportedly threatened to take a legal action.

During the heat of the controversy, Foluke claimed she did not snatch Kayode from his estranged wife as widely claimed.

Against all odds, the two got married traditionally in Lagos and have since been living as husband and wife and even traveled to Canada together recently for a second honeymoon.

In an interview with a Lagos-based soft sell magazine,the screen diva blamed Bukky for leaving Kayode because of her.

Foluke emphasized that it was foolish of her (Bukky) to have packed out of her matrimonial home because of the then alleged extra-marital affair Kayode was having with her (Foluke).

Defending Kayode’s extra marital affair with her before Bukky left him, the actress said, “In the first instance,did you read in the Bible that any of the people who were the apples of God’s eyes had one wife?”

“As it is now, if Kayode goes ahead and impregnates a woman, will I leave him because of that?” she asked,adding that, Yet, I am not even pregnant.”

“If I decide to leave my home because my husband is dating another woman or impregnated a woman, who will lose, my husband or me?” Foluke further queried, “at the end of the day, it is the woman that owns the home and you hold it the way you want to hold it,” she posited.

“So, if my husband is misbehaving and I decide to quit,I shouldn’t blame another person for coming in,” she added.