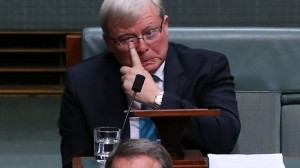 Former Australian Prime Minister Kevin Rudd has resigned from politics in a shock announcement to Parliament.

Rudd, with tears in his eyes, said he would leave before the end of the week.

Claiming the “slings and arrows” of political life had taken its toll, Mr Rudd, who was elected as the member for Griffith in 1998, said it was time to give something back to his family.

“My family have given their all to me in public life,” he said. “It’s now time I gave something back to them.

“This has been the product of much soul searching over the last 12 months.

To all my friends on Twitter I wanted to tell you all that I have decided to go on to the next phase of my life.

Thank for all you kindness and support.

“The decision I have made has not been taken lightly.”

He paused several times to compose himself, though at one stage joked he could use some gin, prompting laughs.

Rudd became prime minister in 2007, defeating John Howard. But his time as prime minister came to an abrupt end in June 2010 when he was dumped by his party in favour of Julia Gillard.

Kevin Rudd addressed Parliament thanking the people of Australia for electing him as their Prime Minister.

Mr Rudd re-claimed the job of prime minister in June this year when he defeated Ms Gillard in a party-room showdown. But he went on to lose the September 7 election to Tony Abbott.

MPs in his own party have been calling on Mr Rudd to resign since the election loss, claiming it was time for the political division in the party to be put to an end.

Mr Rudd said it was a privilege to be asked to return to the prime ministership this year, and that they’d been able to “save the furniture” in the election.

“In fact I think do considerably better than that,” he said, to cheers of “hear hear” from the opposition frontbench.

“I’m glad that all you folk in the frontbench were returned in one piece as well, and that we return Labor as a fighting force for the next election,” Rudd said.

His government had introduced a national curriculum, first ever paid parental leave scheme and a pension increase. But it was the official apology to indigenous Australians in 2008 that remained the highlight of his political career.

“Nothing has brought me greater joy in political life than the smiles I have seen on the faces of our Aboriginal brothers and sisters, young and old, country and city, as a result of the apology,” he said.

“I hope though that what we’ve archived through some healing of the soul will be the first step, the second of course is closing the gap to achieve a healing of broken bodies as well.”