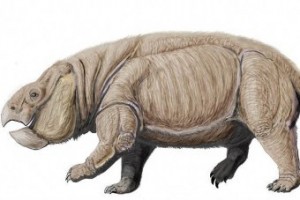 A communal latrine of fossilised faeces has been found to date back 240 million years, 20 million years earlier than the previous record-holder.

Some large, grass-eating mammals such as elephants, rhinos and camels gather together not only when they eat but also when they defecate.

However, evidence published in the Nature Scientific Reports journal suggests the communal latrine has a much older history and one that predates the mammals.

A team led by the National Council of Scientific and Technical Investigation’s Lucas Fiorelli in Argentina reported on a treasure trove of fossilised faeces in the north-west of the country.

They counted no less than 30,000 pieces of faeces, ranging in size from 0.5 to 35 centimetres in length.

In some spots, the ancient excrement piled up to 100 per square metre.

Close examination of the faeces showed it was deposited by members of the Dicynodontes, “megaherbivore” reptiles which lived closely with early dinosaurs.

“This is the first evidence of megaherbivore communal latrines in non-mammal vertebrates, indicating that this mammal-type behaviour was present in distant relatives of mammals,” the paper said.

Researchers have surmised the communal poop has several important functions.

One is hygiene, to prevent the emergence of new parasites.

Another is safety, to provide surveillance in numbers against any prowling predator.