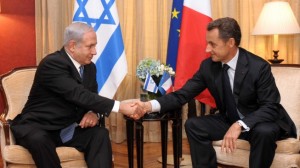 France’s president has promised to take a hard line in upcoming nuclear talks with Iran this week, pleasing Israeli officials who warmly welcomed him to the Jewish state for a three-day visit.

Francois Hollande’s message was welcomed by his Israeli hosts, who have voiced concerns that an emerging deal with global powers gives Iran too much without getting enough in return.

“France will not make concessions on nuclear proliferation,” Hollande said at a welcome ceremony at Israel’s international airport on Sunday. “France will maintain all its measures and sanctions until we are certain that Iran has renounced nuclear weapons.”

Iran’s suspect nuclear program will be high on the agenda of Hollande’s visit. France is a member of the six global powers conducting negotiations with Iran.

Israeli Prime Minister Benjamin Netanyahu has been outspoken in his opposition to a potential deal in which the international community would ease some sanctions on Iran in exchange for some curbs on Iran’s nuclear program. The countries fear that Iran is trying to build a nuclear weapon, a charge Iran denies.

The six powers negotiating with Iran – the US, Russia, China, France, Britain and Germany – failed to reach an agreement earlier this month. The US has expressed optimism that an initial deal can be wrapped up at the next round of talks, providing a six-month period to reach a final agreement.

Netanyahu believes the sanctions seriously have weakened Iran and that providing any relief, even temporarily, will be lead to the crumbling of international pressure. He has urged the world to step up, not ease, the pressure on Iran until it completely dismantles what he says is a military nuclear program.

Netanyahu’s strong objections have raised tensions with the US, which said his concerns are premature. US officials, seeking to calm concerns in Israel and among its allies in Congress, say Iran will get only minor relief from the painful sanctions under the international proposal.

Hollande, accompanied by his girlfriend Valerie Trierweiler, was welcomed by an honour guard at Ben-Gurion International Airport near Tel Aviv. With trumpets playing in the background, a line of politicians, religious leaders and other dignitaries greeted the French leader.

“Israel sees in France a true friend,” Netanyahu said at the ceremony, thanking Hollande for his positions on Iran.

Speaking in Hebrew, Hollande said: “I will always remain a friend of Israel.”
Later, during a stop at President Shimon Peres’ official residence, Hollande sought to assure the Israelis that France will not accept a deal at any price.

“We want an agreement,” he said. “This agreement can be obtained but is only possible if Iran renounces nuclear weapons.”

Hollande also planned a visit to Israel’s national cemetery as well as Yad Vashem, the national Holocaust memorial, before a meeting and dinner with Netanyahu.

Israel views a nuclear-armed Iran as a threat to its very existence, citing Iran’s repeated calls for the destruction of the Jewish state, Tehran’s long-range missile program and its support for violent anti-Israel groups like the Hezbollah in Lebanon.

Netanyahu has repeatedly called the potential agreement between the six powers and Iran a “bad deal.” He also has hinted at readiness to attack Iran if he objects to the deal, saying repeatedly that Israel is ready to “defend itself.”