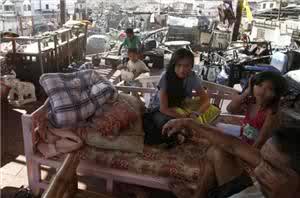 Aid and supplies have begun to arrive in the Philippinnes typhoon-devastated Tacloban as the airport opened, giving a boost to relief efforts, but UN humanitarian chief Valerie Amos said distribution is still a challenge.

The first C-130 transport planes arrived at 3am on Thursday, six days after Typhoon Haiyan rampaged through the city, destroying almost everything in its path.

Emergency supplies of food, water and medical kits are ready to be delivered but they remain frustratingly out of survivors’ reach.

The choice is to use the same truck either to distribute food or collect bodies.

Much of the aid, and the staff needed to distribute it, has been stuck in Manila and the nearby airport of Cebu, a 45-minute flight away.

Philippine Special Forces on Wednesday night held back hundreds of people, many of whom had walked for hours to reach the airport and then waited for days with little or no food or water.

Amos admitted the UN had let people down because they had not been able to get aid to people more quickly.

She told Al Jazeera that the roads in the country had proved impassable because of debris over the past few days.

“We’re also challenged when the supplies get there, because there is no fuel, there are very few trucks on the ground. So we need to find a way to get those good into Tacloban,” she said.

Many petrol station owners whose businesses were spared have refused to reopen, leaving little fuel for trucks needed to move supplies and medical teams around the devastated areas nearly a week after the typhoon struck.

“There are still bodies on the road,” said Alfred Romualdez, mayor of Tacloban.

“It’s scary. There is a request from a community to come and collect bodies, they say it’s five or 10. When we get there it’s 40.”

“The choice is to use the same truck either to distribute food or collect bodies,” he added, outlining a grim choice.

Outside Taclaban, burials began for about 300 bodies in a mass grave on Thursday. A larger grave will be dug for 1,000, city administrator Tecson John Lim told the Reuters news agency.

The city government remains paralysed, with just 70 workers compared to 2,500 normally, he said. Many were killed or injured, had lost family or were simply too overcome with grief to work.

The government was distributing 50,000 “food packs” containing 6kg of rice and canned goods each day, but that covers just three percent of the 1.73 million families affected by the typhoon.

Anger and frustration has been boiling over as essential supplies failed to reach many of those in need.

Widespread looting of rice stocks and other supplies broke out across hardest-hit Leyte province on Wednesday despite the deployment of soldiers to maintain law and order in the wake of the typhoon.

Jericho Petilla, Philippine energy secretary, has said it may take six weeks before the first typhoon-hit towns get power back. [AlJazeera]