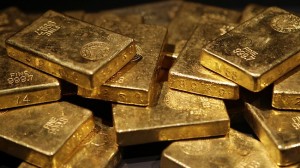 Cleaners found a stash of 24 gold bars worth more than $US1.1 million hidden in an airplane lavatory after a flight from Bangkok landed in eastern India, officials said.

The plane, belonging to private carrier Jet Airways, was being cleaned at Kolkata airport after a trip from the eastern city of Patna. Indian media reported the plane had been travelling from Bangkok.

“The cleaning staff of the airport were going though their routine duties and found two bags in the toilets of the plane,” said director of the airport B.P. Mishra.

The 24 one-kilogram gold bars “have not been claimed by anyone. No arrest has been made,” senior customs official R.S. Meena said.

Meena estimated the value of the haul at about 70 million rupees, or $US1.1 million.

India, which rivals China as the world’s biggest gold consumer, has witnessed a sharp rise in smuggling since import duties were hiked three times this year to dampen demand for the precious metal.

Gold is hugely popular in India, especially during religious festivals and wedding seasons, and is the second-biggest contributor after oil to India’s massive current account deficit – the broadest measure of trade.

The government has been seeking to reduce gold demand and narrow its deficit by hiking bullion import duties.
Indians also buy gold in the form of jewellery, bars and coins as a hedge against inflation.

“This is the fifth (suspected gold smuggling) incident in the past one month,” said BP Sharma, director of Kolkata’s Netaji Subhash Chandra Bose International airport.

“Smuggling of gold through the airport has risen” as the hike in the import duty of gold has made the metal costlier, Mr Sharma said.

Last month, intelligence officials recovered gold worth 95 million rupees from the toilet of a plane after it landed in the southern city of Chennai en route to New Delhi from Dubai.

In August, customs officials seized smuggled gold worth 11 million rupees from a passenger travelling from Singapore to the Indian capital.

Thirty-one gold bars were found in specially-designed pockets in the suspect’s trousers.

In Kolkata, a 28-year-old man flying to India from Bangkok was recently arrested with gold bars concealed in large torchlights, officials said.

In another incident, a man travelling to India from Dubai was caught in Kolkata while trying to smuggle five gold bars in his body, they added.