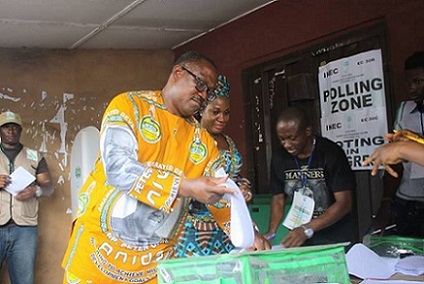 A chieftain of the Peoples’ Democratic Party (PDP) and billionaire businessmen, Prince Arthur Eze, on Thursday said the irregularities associated with last Saturday’s governorship election in Anambra State should be blamed on the state governor, Mr. Peter Obi.

Eze, who financially bankrolled the electioneering campaign of the PDP candidate, Tony Nwoye, was speaking with State House correspondence at the Presidential Villa, Abuja.

He maintained that Governor Obi championed the rigging of the election against the wish of the people in the state.

He said: “Obi committed a crime and rigged election against the poor people and brought his man, Obiano. For eight years, there were no longer local government elections in Anambra, now he brought Obiano, his treasurer to take over from him. Now, Obiano will spend eight years and bring somebody, then we are in trouble.

On whether he backs the call for the election to be cancelled, he said, “Jega is very emotional; he is a very straightforward human being. He said this election was an act of sabotage. He was frank and God will advise him on what to do”.

“Go and pray. What is going to happen in Anambra will happen in so many places. Pray for yourselves, not for us, we are gone, we are aged.”

Expressing his fears on the 2015 general election, Eze said: “I don’t want criminals to take over in 2015. That is why I am crying.”