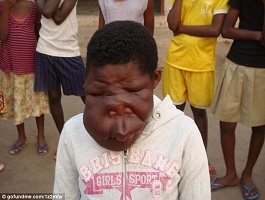 Ghana – A teenage orphaned girl with a severe facial deformity is to receive life-changing surgery thanks to a fundraising campaign initiated by a social networking website Tumblr.

The Ghana orphanage caring for 13-year-old Esinam needed to raise $10,000 to pay for surgery, but managed to raise only $130 in donations. Then, a Tumblr user turned to the web community and helped to accumulate even over $10,000 in less than a week.

The kind-hearted blogger was able to boost the orphan’s surgery fund by encouraging more than 450 people to donate.

The deformity suffered by the 13-year-old has prevented her from attending school.

No one is sure what is causing the mass growing on her face, because Esinam’s parents died when she was younger. When the grandmother who helped raise her died from a stroke, the teenager went to live at the orphanage.

After the rush of donations a spokesman for the foundation posted an update on the teenager and thanked the contributors. He added that an elderly woman who has been helping care for her was also relieved to hear that the teenager would finally get her surgery and achieve her dream of returning to school.