Home Politics ‘I Must Be Allowed To perform My Duties As PDP National Secretary’,...
Facebook
Twitter
WhatsApp 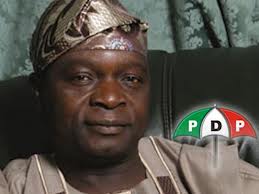 Prince Olagunsoye Oyinlola on Wednesday said he remained the National Secretary of the PDP.

Dismissing reports of his suspension from the party, Oyinlola told a news conference in Abuja that the PDP might collapse “if the crisis rocking it was not properly addressed.

“I want to pray and believe that reason will prevail and will bring the crisis to an end. If not, that may mean the end of PDP as a ruling party’’, he said.

He emphasised that he remained the National Secretary of the PDP, adding that he would institute legal action against the party if anything was done in the name of its secretary without his signature.

“I remain the national secretary and I must be allowed to perform my duty because anything done in the name of secretary without my signature is absolutely illegal.

“It will face the legal test at the court and we don’t need to put our party into such ridicule and problems’’, he said.

He, however, said that he had taken a number of steps to ensure that peace reigned in the party.

Oyinlola stressed the need for the party leadership to abide by its Constitution, adding that ruling with impunity was not the way to run a party.

“We all know that factionalisation of a ruling party will have a collateral damage on the unity of the country, more so when we have been in power in the last 14 years.

“To have a new beginning now means stepping backward in terms of development.

“And that is why we were making efforts to make sure that we reconcile. Somebody who wants a united family cannot say go to blazes”, Oyinlola said.

Oyinlola argued that he, Abubakar Baraje, Sam Jaja and Ibrahim Kazaure, who were recently suspended from the party could not be said to be the pillar of ‘New PDP’.

This, he maintained, could not be correct when seven serving Governors were in the splinter group and were not accused of anti-party activities.

“I want to believe that they only added these other people, the target was Oyinlola, to circumvent the judgment of the Court of Appeal.

“They just added others so that it will not be too naked’’, he said.

Oyinlola questioned the legitimacy of the Umaru Dikko-led Disciplinary Committee of the party recently set up by Alhaji Bamanga Tukur, the party`s National Chairman.

According to him, the committee has not been approved by the party`s National Executive Committee (NEC) as stipulated in its constitution and hence cannot be authentic.

He further stated that the procedure for disciplining erring party members was clearly spelt out in its constitution and should be adhered to.

“Specifically, Section 57 (4) states that where an allegation is made against a member of the party, the disciplinary committee shall inform the member in writing of the allegations made against him or her.

“Nobody has till date informed me of any wrong doing against my party’’, Oyinlola said.