The Central African Republic (CAR) has been in turmoil since the Seleka coalition of rebels ousted president François Bozize on March 24. About 460,000 people – 10% of the population of 4.6 million – have fled their homes, while more than a million need food aid, according to the United Nations.

The French military has begun boosting its mission to the CAR, airlifting troops and equipment to the capital Bangui ahead of an anticipated UN-backed intervention to restore order in the country.

France already has around 400 troops stationed in Bangui, and is going to deploy at least another 1,000 soldiers in a bid to halt mounting violence in the country, where religious clashes have aroused fears of sectarian massacres and a humanitarian crisis in the making.

Below are the most recent pictures from the country. 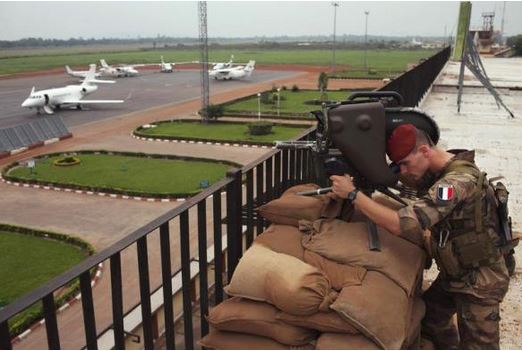 4. A woman walks by a Multinational Force of Central Africa (FOMAC) truck in Boali, November 2013.

6. Militia fighters known as anti-balaka stand guard in Mbakate village, November 2013. The group say they are protecting their village from Seleka fighters.

7. A house which was destroyed by Seleka fighters, according to a government source, stands outside Bossangoa, November 2013.

8. Militia fighters known as anti-balaka pose for a photograph in Mbakate village, November 2013.

9. Displaced people sit next to their tents in the grounds of Saint Antoine de Padoue cathedral in Bossangoa, November 2013.

10. A displaced boy holds a baby as he sits in the grounds of Saint Antoine de Padoue cathedral in Bossangoa,November 2013.