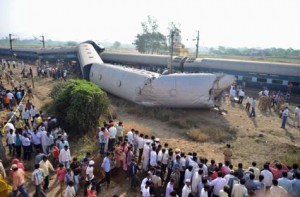 Three passengers died and 23 were injured when 10 rail coaches of the Delhi-Nizamuddin-Ernakulam Mangala Lakshadeep Express derailed this morning at Ghoti, near Igapturi station, 125 kilometres from Mumbai.

The derailment occurred at 6.25 am when the super-fast train was on its way from Delhi to Ernakulam—a distance of 2763 kilometres to be covered in 48 hours. Whilst one of the passengers died in the S-10 coach itself, two others succumbed to their injuries in Ghoti and Nashik hospitals.

Seven of the injured were admitted to a civil hospital in Nashik, three in Vakratunda hospital in Nashik and two in a rural hospital in Ghoti. Eleven were treated for minor injuries, said V. Chandrasekhar, Public Relations Officer, Central Railway (CR). Among them, 15 are grievously injured.

Senior railway officials, including the general manager, CR, have rushed to the site to monitor the relief operations. One special train with 22 coaches of various classes along with a guards brake van has left Lokmanya Tilak Terminus for Igatpuri and will run as 12618 Mangala Express Special to take passengers to Ernakulam.

Around 450 passengers were taken by buses from the derailed site to Igatpuri station to board the special train scheduled to leave at 12.30pm.

Railway officials have provided helplines for the convenience of passengers’ relatives and the public at Kalyan, Igapuri, Panvel, CSTMumbai, Trichur, Ernakulam, and Hazrat Nizamuddin, Delhi.

The derailment has caused several cancellations, termination and diversions of trains.