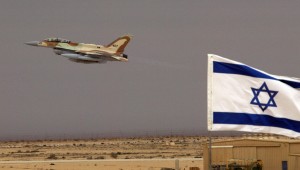 Israel has reportedly carried out an air strike on a Syrian military installation to stop a shipment to Hezbollah, as inspectors said Syria’s entire declared stock of chemical weapons has been placed under seal.

Saudi-owned Al Arabiya television said on Thursday that Israel had hit a Syrian air base in Latakia province, targeting a shipment of surface-to-surface missiles destined for the Lebanese Shiite movement.

A US official confirmed to AFP that “there was an Israeli strike” but gave no details on the location or the target, while Israeli officials refused to comment.

Al Arabiya quoted the head of the Syrian Observatory for Human Rights as saying explosions took place Wednesday near Latakia at an air defence base.

In May, Israel carried out two air strikes inside Syria, and a senior Israeli official told AFP both targets were Iranian weapons destined for Hezbollah.

The Organisation for the Prohibition of Chemical Weapons reported on Thursday that all of Syria’s chemical weapons were under “tamper proof” seals.

“All stocks of chemical weapons and agents have been placed under seals that are impossible to break,” OPCW spokesman Christian Chartier said on Thursday.

Inspectors had until Friday to visit all the sites and destroy all production and filling equipment in accordance with a timeline laid down by the OPCW and a UN Security Council resolution.

The resolution, stating that the arsenal must be destroyed by mid-2014, followed a US-Russian deal to avert military strikes on Syria after chemical weapons attacks near Damascus in August.

The West blamed those attacks, which killed hundreds, on Al Assad’s regime, which denied all responsibility and, in turn, blamed rebels.

The United States is “increasingly confident” the chemical arsenal will be eliminated by June 30, Thomas Countryman, a senior State Department official in charge of non-proliferation issues said.

More than 120,000 people have been killed in the 31-month rebellion against the Al Assad regime triggered by his bloody crackdown on Arab Spring-inspired democracy protests.