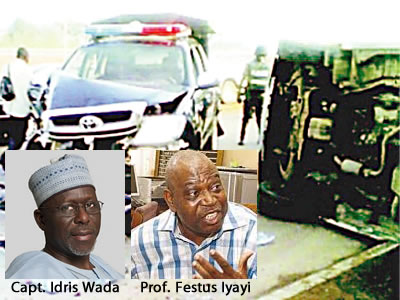 The presidency has described as unfair and untrue, allegations that the Federal Government has a hand in the death of former President of the Academic Staff Union of Universities, ASUU, Prof. Festus Iyayi, who was killed last week in an accident involving a vehicle he was traveling in and a car in the convoy of the Kogi State governor, Capt. Idris Wada (rtd).

Speaking weekend when he paid a condolence visit to the Iyayi family in Benin, Edo State, the Senior Special Assistant to President Goodluck Jonathan on Youths and Student Affairs, Mr. Jude Imagwe said there was no doubt that Nigerians were shocked by the accident which resulted in the late scholar’s death, but that dragging the Federal Government into it “is quite unfortunate because President Jonathan has been doing his best to ensure that this ASUU strike was suspended.

“When you say government is to blame, it is like saying government has a right to take someone’s life. It is God that gives life and knows the appointed time to take life which is inevitable. And to also say that government is paying lip service to education is not correct either. That we have not got to where we need to get to in the educational sector, I will agree with you.

“Government is making progress gradually. Where we were yesterday is quite different from where we are today. The current administration is giving all it can and will continue to ensure that the educational sector is strengthened.”

Imagwe recalled the role played by Prof. Iyayi when he (Imagwe) was NANS President in resolving disputes, which bordered on students’ welfare on campuses, noting that Iyayi’s fatherly counsel would be missed.

“The late former president of ASUU was like a father to many of us who were involved in student unionism”, he noted.