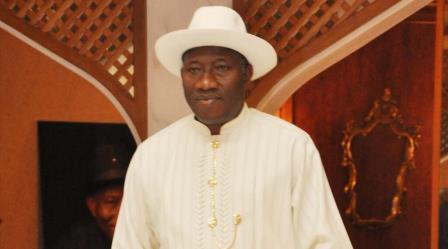 President Goodluck Jonathan has expressed his appreciation to all Nigerians for their prayers, support and goodwill during his brief period of illness in London while attending the Nigeria Honorary International Investors Council, HIIC, meeting in London.

He also thanked the generality of mainstream media for their fair-minded and objective reportage while he was indisposed but gave New York based online news media, Sahara Reporters and some other internet-based media knocks for attempting to distort the fact on his state of health.

This was contained in a statement signed by the President’s Special Adviser on Media and Publicity, Dr Reuben Abati on Saturday.

Below is the full statement: “President Goodluck Ebele Jonathan thanks all patriotic and well-meaning Nigerians, including his supporters, friends and political associates who expressed and conveyed their sympathies and solidarity with him, through various means, following the announcement of his sudden indisposition while on a mission to attract greater investments to accelerate the growth of the Nigerian economy in keeping with his agenda for national transformation.

“The Presidency also commends the generality of the mainstream media whose coverage of the President’s slight health challenge in London was mostly factual, objective, fair-minded and supportive.

“We however condemn the utterly irresponsible, deplorable, highly unprofessional and unethical antics of certain fringe elements operating in the nebulous sphere of cyberspace who persist in seizing every opportunity to unjustifiably malign and impugn the character and integrity of the elected leader of their country.

“It is very regrettable indeed that after, in compliance with President Jonathan’s standing instruction that Nigerians must never be kept in the dark about the state of his health, the public was duly informed that the President had received precautionary medical attention for an unexpected indisposition in London, Sahara Reporters and some other reckless, lawless, impudent and unpatriotic internet-based media chose to assault the sensibilities of all decent Nigerians again with their entirely fictional, malicious, hate-driven and scurrilous distortion of the facts of the President’s indisposition.

“The truth is that President Jonathan observed his 56th birthday anniversary quietly. For part of the day, he was airborne, in transit between Abuja and London. On arrival in London, he spent the rest of the day in the privacy of his hotel room. It has never been his custom to celebrate birthday anniversaries and no exception was made this year. No birthday party was therefore held for the President in London and there was certainly no drinking spree as Sahara Reporters claimed.

“As unregulated as they are, Sahara Reporters and their ilk are not beyond the bounds of legal action for libel and willful defamation of the character and reputation of a President who has courageously stepped forward to serve his country.

“They know very well that they can never substantiate or prove the constant false allegations and innuendoes they publish for the sole purpose of negatively portraying President Jonathan and his administration.

“Their incessant claim of a bibulous President is pure fiction and blackmail, and the product of malicious imagination. We warn that our forbearance of their disrespectful caricaturing of the President is not limitless.

“The Presidency will like to reiterate the trite point that no human being is beyond health challenges irrespective of their station in life. Sadly, this commonplace fact appears to be beyond the understanding of the publishers of Sahara Reporters who seem to have lost all sense of propriety, decency and human compassion.

“The President is comforted by the prayers, support and overwhelming goodwill of the people of Nigeria, fully assured that the forces of good will continue to triumph over the forces of darkness in our land”.