President Goodluck Jonathan, was yesterday, received by Governor Chibuike Amaechi of Rivers State when he arrived the Port Harcourt International Airport, at 2pm.

Seriake Dickson of Bayelsa State; Martins Elechi of Ebony State and several other political leaders and traditional rulers in the South-South were also on ground to receive the president.

Despite unresolved differences between the president and the Rivers Governor, they flew in the same chopper to Okrika. 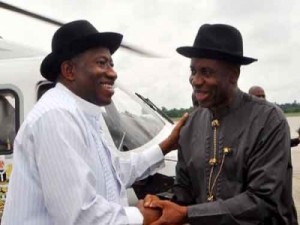 The President was in Rivers State to receive a chieftaincy title in Okrika, home town of his wife, Dame Patience, where he and the First Lady were conferred with titles by King E.D.I Obudibo, Ikwo V of Ogoloma.

Preparation for the funeral of the First Lady’s mother, Madam Charity Oba, which holds today, has also hit top gear, as cows and bags of rice had been distributed to the various war canoe houses in the town, with sources saying it was done to ensure the funeral venue was not overcrowded.

“We were told to celebrate in our various compounds, so that the venue of the funeral is not congested. They gave the various war canoe houses cows, rice and cash to take care of themselves. You can see that the community is in a celebration mood,” a community source said.