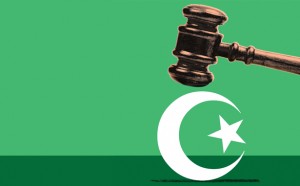 A judge of the Sharia High Court in Maiduguri, Borno State capital was yesterday sacked over alleged corruption.

In a statement signed by the Secretary of the Borno State Judicial Service Commission, Baba Goni Adam, the judge, Alkali Mohammed Suguli of Yerwa Civil Sharia Court I, Maiduguri, was said to have been found guilty of bribery and corruption when he “unlawfully sold inherited property” by the State Judicial Council, SJC.

The SJC’s statement reads in part, “The Borno State Judicial Service Commission met on the October 30 and 31, 2013 and considered the report of the Public Complaints Committee which investigated a petition by one Bukar Karkarma against Alkali Mohammed Suguli of Yerwa Civil Sharia Court I, Maiduguri.

“The Commission accepted the report of the Public Complaint Committee which found Alkali Mohammed Suguli guilty of gross misconduct in the case of Mallam Bukar Karkarma versus Alhaji Bashir Liman.

“The Judge (Suguli) unlawfully sold inherited property. The Commission consequently dismissed the judge, Alkali Mohammed Suguli from service with effect for the October 31, 2013.”

The sack of Suguli came after a fierce legal battle that commenced in 2006 when the petitioner, Bukar Karkarma, wrote to the State Chief Judge seeking redress in the suit before the (now) sacked judge. The petitioner cried foul as he suspected that Suguli had been bought over to rule against him in the suit between him and Alhaji Bashir Liman, leading to Suguli selling his inherited property.

It was gathered that, the Chief Judge, upon receiving the petition, directed the Chief Registrar of the High Court “to invite the comments” of the former Sharia Court Judge, before the case was referred to the Public Complaint Committee, PCC, for adjudication.