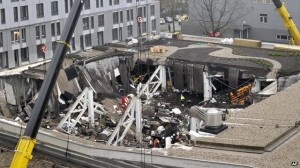 Latvia is mourning its dead after rescuers spent a second night looking for survivors in the rubble of a Riga supermarket whose roof collapsed, killing at least 52.

The latest body was hauled out at dawn and hopes of finding anyone alive were dwindling nearly two days after the worst disaster since Latvia’s 1991 independence. 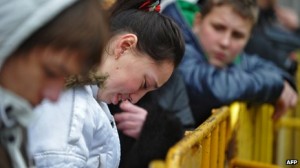 “The latest body was found this morning at 6am, bringing the total to 52, including two bodies that are still unidentified,” said police spokesman Toms Sadovskis.

Rescuers continued to comb the mangled Maxima supermarket’s wreckage of steel and concrete as morning mists rose after a second night of work in near-zero temperatures.

Riga mayor Nils Usakovs said on Friday five people were feared trapped inside but it was unclear how many were still believed to be missing on Saturday.

Forty people survived the catastrophe, according to rescue services.

A ring of thousands of glowing candles and heaps of flowers decked the perimeter crash barriers surrounding the disaster site, placed by a constant stream of shell-shocked members of the public.

Flags were being flown from houses across the country with a black sash attached – a traditional sign of mourning.

Just days after November 18 independence celebrations, the tragedy snuffed out an upbeat mood in Latvia, with 2014 set to mark its entry in the eurozone and showcase Riga as the European capital of culture.

Child Protection Inspectorate director Laila Rieksta-Riekstina told Latvian Radio on Saturday that “16 children lost one parent and one child has unfortunately lost both parents” in the tragedy.

The website of the State Fire and Rescue Service (VUGD) paid tribute to three firefighters who were among the dead, describing them as “more like family members than colleagues”.

Books of condolence have been opened at Latvian embassies abroad including Russia, Poland, the USA, Canada, Britain and Ireland while world leaders have also expressed sympathy.

A disaster fund set up for the victims has already collected 86,000 lats ($A176,755) from public donations, the Ziedot charity announced on Saturday morning, with central government and Riga city council both promising compensation to victims.

Part of the roof of the Maxima supermarket crashed down during peak shopping hours around 6pm on Thursday, in the Zolitude district of the Latvian capital, with a second collapse crushing to death rescuers who had already entered the building.

Latvia will also observe a moment of silence on Monday while police probe what caused the cave-in at the two-year old supermarket.

Speculation has centred on plans to build a rooftop garden and the possibility that building regulations may not have been followed in full.

A photograph published by Latvia’s Diena daily on Friday showed an aerial view of the roof prior to the collapse, covered in soil, shrubbery, a children’s playground and construction material.

Run by the Lithuanian-owned Maxima chain – Latvia’s number two retailer after Rimi – the supermarket was built in 2011 and was named one of the country’s top three architecture projects that year.