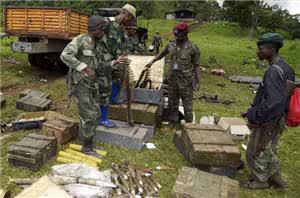 The defeated M23 rebel group has been blamed for killing scores of civilians in eastern Congo over the last year and a half.

The group announced it would disarm and pursue political talks just hours after government forces drove its fighters out of their last two hilltop bases of Tshanzu and Runyoni before dawn.

A two-week UN-backed offensive had cornered the rebels in the lush hills along the border with Uganda and Rwanda.

African leaders had urged the group to renounce their rebellion to allow the signing of a peace agreement with the government of Democractic Republic of Congo’s President Joseph Kabila.

“The chief of general staff and the commanders of all major units are requested to prepare troops for disarmament, demobilisation and reintegration on terms to be agreed with the government of Congo,” M23 leader, Bertrand Bisimwa, said in a statement.

Congolese government spokesman, Laurent Mende, said rebels were surrendering in large numbers and that the Kinshasa government was ready to pursue peace talks.

“There is no more place in our country for any irregular group,” Mende said on Tuesday, adding that the newly defeated M23 rebels “were top of the list. They have been replaced by the FDLR (Democratic Forces for the Liberation of Rwanda). We are going to get on with disarming them.”

“In a region that has suffered so much, this is obviously a significant positive step in the right direction,” Russell Feingold, US special envoy to the Congo and the Great Lakes region, said at a briefing in Pretoria.

While the dramatic developments marked a significant success in the Congolese government’s fight against armed groups in the embattled east, experts warned that the rebel retreat would not result in an immediate peace in a region ravaged by fighting for nearly two decades.