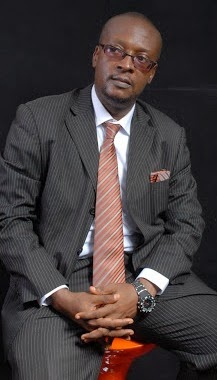 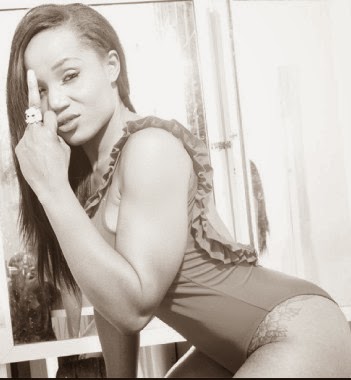 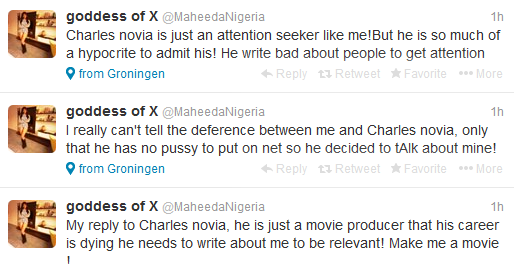 Singer Maheeda has fired back at Nollywood producer Charles Novia, days after he wrote an article criticizing her constant show of nudity on social media. Maheeda’s tweet above. See Charles Novia’s article below:

In the past few months, some prominent and other bandwagon bloggers have been inundating the social media space with inappropriate pictures of a confused personality called Maheeda.

From scanty information available about the lady, she used to be a prostitute who got ‘converted’ into Christianity and later released a Gospel album or some singles. Somehow, she decided to straddle the pop culture horse and brought out some nifty singles and videos which found backwater acceptance on Youtube.

Maheeda is also reported to be married to a white dude and she is presumed to be presently living in a European country with the man and her daughter (or divorced or separated from him as some reports say) I took little pains to do this background research on her so as to be well-informed about the next few points I would make about her behaviour.

Somehow, Maheeda started posting suggestive pictures of her body on her instagram page which caught the interest of Nigerian bloggers. Since blogging is generally an acceptable form of lazy journalism and tittle-tattling in Nigeria, Maheeda’s pictures got the desired attention she wanted. Either by a covert or overt payment to leading bloggers to keep her in the news (as it is wont in Nigerian cyberspace) or a calculated ploy to garner more hits to their sites, the bloggers went all the way out with more indulging pictures of the young lady. And she was ever willing to give more and cheerfully too with no intention by me to denigrate her past profession by this phrase.

From suggestive pictures of her near unclad body parts, the young lady went on a visual spree of debased pictures of herself and with the lecherous or amused oogling of social media commentators, she finally threw whatever was left of her indiscreet womanhood and posted wanton naked pictures of herself on instagram. Blogosphere went crazy in Nigeria with repressed hypocites heaping accolades or abuses at her or ravished reprobates asking her to carry on!

Instagram finally had enough a few days ago and deleted her account for good for crossing boundaries of (in)decency, perhaps.

It is instructive to psycho-analyse negative trenders such as Maheeda who have decided to gain cheap or compulsory notoriety by posting pictures of their nakedness on social networks. Granted, there were others before her based in Nigeria or somewhere in America , some older Nanny Goats who threw decorum to the wind as well and posted pictures of drooping breasts and disgusting backsides in a bid to gain unfathomable attention. Did Maheeda learn from them? Or did she decide to improve on their art ( or rather, their tart!)?.

Whatever the reasons are, we all should be worried about this growing trend where shamelessness and wanton exposure of Nigerian women is fast becoming the order of the day. The children see all these things and I shudder to think of what is going to happen in our social space in a few years. A replication or cloning of millions of Maheedas and her likes is probably inevitable.

Oh yes, there are some who would react angrily to the fears I have expressed here and post comments under ‘Anonymous’ name tags on some blogs where this article would find amplification and vilify me and not my points. For such missing links, you are entitled to your putrid opinions in the closets of your anonimity where cowards and bullies find voice.

But the fact remains that you who support and urge the Maheedas of this clime to carry on with the de-mystification of all that is dear and sacrosanctwomanhood, are no better than she is. You are intertwined in the pugnancy of her putrid purpose. You both are destroyers of the last remnants of the African woman’s mystique and majesty. You support and encourage her to destroy your children’s moral future. That is just the plain truth.

I may not know much about psychology or psychosis but I am willing to bet that Mrs Maheeda is in the early stages of bi-polarism. It is possible that she is using the pictures to Jekyll and Hyde her mental health issues. Mercifully, she lives in a Western society where it is only a matter of time where her total sanity would be called to question.

But if Maheeda is not ill, then what is her plan? Is she possessed by a legion of seventy times seven demons after her earlier conversion to Christianity? Or is she just being plain silly? If she is being silly, then the blogs and websites which amplified her silly whims have a moral question to answer.

But Maheeda is not the only by-product of a jaundiced country. We have her likes in the National affairs of this country. Only, those types don’t have to post their pictures for us to see. They are already naked dancers in the ruinous chambers of national leadership. They and the mad ones before them inflicted the pain on the social fibre of Nigeria which Maheeda was unfortunate to grow up in. Their naked dances of greed and corruption turned Maheeda and millions like her into Prostitutes to eke a daily living. Maheeda could well be paying back the society with her nakedness, spoiling the children of the new Nigeria as a vengeance eats her. She just might be saying, ‘ as una spoil my life, me sef go spoil una pikin own’. And stupidly the children of her vengeful mission oogle and applaud.

It is not also far-fetched too that Maheeda might be using the naked pictures of herself as a new form of visual prostitution. Selling her body , now revamped and refurbished in a new clime, to her former clients as if to call them out. She might be saying, ‘You can’t have this now. I have gone to another level’.

Indeed, she has reached a new level. An all-time low of self-destruction in a gradual process. But knowing the society in which I live and where she comes from, her destruction may be pyrhic: the sick social society would soon invite her to red carpet functions and events. Soon, she just might be signing autographs and strutting societal streets of false adulation.

Then she would have have the last laugh. Or perhaps maybe society and fate have one last wince to elicit from her. Time has a way of telling, though.