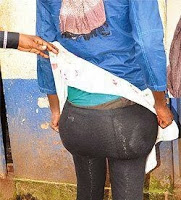 Nairobi, Kenya: There was drama in Nairobi over the weekend after a 26 year old man who has been deceiving men while disguised as a woman was arrested.

The man had his breasts stuffed with two gloves filled with water and nicely tucked into a brassiere. He dressed like a woman and looked so attractive since he had a big bum.

According to ‘her’ colleagues, the suspect had been in the business for a while now and they had never suspected anything. He always looked like a woman and was smartly dressed all the time.

Speaking to the media, the suspect admitted that he started dressing like a woman and practicing prostitution last year.

He claimed to be fending for his family arguing that he had looked for a job for many years to no avail.

He said that he was enjoying relations with lots of men and it was sad that he now had to stop after being discovered.