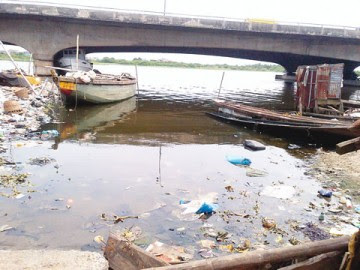 A 25-year-old man, Toheeb Jimoh, has drowned in a Lagos river while reportedly swimming to win a bet. He had allegedly bragged that he could swim the Lagos Lagoon from a particular point to the shore on Saturday evening. It was learnt that when some people challenged his claim, he had allegedly dared them to place a bet. After the bet was placed, he reportedly went on a boat to the point and jumped into the lagoon hoping to swim to the shore. Friends of the deceased, who had accompanied him on a boat, were said to have fled the scene after he did not make it out of the water.

The incident, which occurred at Aiyedun Street, Bariga, was said to have caused commotion among residents who trooped to the site, hoping to save Jimoh. The corpse of Jimoh was said to have been recovered around 7pm same day and buried beside the water around 12am in line with the traditions. The deceased had only recently gained admission into the University of Agriculture, Abeokuta before the tragedy struck.

A source who spoke on the condition of anonymity said, “He and some of his friends were actually fond of betting and gambling. So that evening, they decided to take the betting to another level. Toheeb told them he could swim from the Third Mainland Bridge end of the river to the shore. When the boat they took got to that point, which was a little close to the shore, he gave his clothes to his brother and jumped into the water. His friends who were in the boat waited for him at the shore without success. After it dawned on them that something was amiss, his younger brother raised the alarm. By the time people got to the scene, he had died.”
May his soul rest in peace!