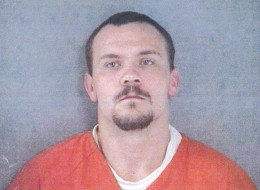 A mixed martial arts fighter who who once faked his own death was sentenced Monday for robbing a gun store with a hammer.

Charles Rowan, 26, was sentenced to 17.5-40 years in prison for armed robbery, the New York Times reported. In August, Rowan, whose cage-fighting name was “Freight Train,” pleaded guilty to the March robbery of Guns and Stuff, a gun store in Gladwin County, Mich.

Rowan brutally beat the store’s owner, Dick Robinette, with a hammer before making off with eight handguns, ABC 12 reported. Rowan’s accomplice and girlfriend, Rosalinda Martinez, stayed behind to call 911, then told cops she was just an innocent bystander.

Everybody believed Rowan was really dead, going so far as to organize benefit MMA fights in his honor, according to the Times. However, the death was actually a hoax, created by Rowan and Martinez to help evade the $80,000 debt he owed a drug dealer. Rowan actually watched his own memorial service, hiding in an upstairs bedroom.

The jig was up two days after the robbery, however, when Rowan’s mug shot surfaced and his grieving friends and family realized he was alive.

Robinette, who was injured during the robbery, attends physical therapy multiple times a week.

Maritnez was sentenced to a minimum of 5 years, 10 months and a maximum of 30 years in prison for her involvement in the robbery.