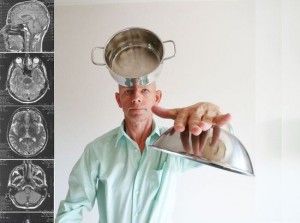 Superpower or just super-sticky skin? Miroslaw Magola, from Germany, claims he can manipulate metal objects with his telepathic powers. The 55-year-old says that he began to master the ability of manipulating objects with his mind after he studied the phenomenon of psychic energy. “I found out I could train myself to manipulate lifeless objects as I studied for my degree in the early ’90s,” Magola says. “I have since spent years perfecting the technique and exploring further into human magnetism.”

Magola doesn’t want to stop at simply making objects stick to his body as if they were glued onto it, because he believes he can use his powers for the benefit of humankind. “I am determined to develop my unique powers further in the future and I’m currently working with telepathy and healing to see how psychokinetic energy can be put to a use that will benefit mankind.” This real-life Magneto doesn’t claim he is one of a kind. On the contrary, he says there are many others who can control this kind of power. “Magnetic people prove with mind power they are capable of lifting objects of different materials off the floor without aid. This can be done with the head or palms of the hands to hold objects vertically, horizontally or in circular movements. Some magnetic people are also capable of lifting objects from the floor with the palm of a gloved hand or even with talcum powder on the skin.” As expected, people are either plain skeptical or too inquisitive when it comes to Magola’s powers, but his answer to either of them is that what draws the line between a person with real magnetic powers and a fake one is the ability to defy the laws of gravity.

Apart from helping the entire human race with his powers, Miroslaw Magola wants to win the One Million Dollar Paranormal Challenge prize, which hasn’t been claimed for half a century. The challenge, set by the famous magician James Randi in 1964, can be won by anyone who can demonstrate the existence of, for example, past life remembrance, faith-healing or telepathy. Magola already has an idea of how to prove his power to everyone. “I want to do it live on TV and cannot wait to get a reaction from an audience and prove to skeptics who claim it is all a hoax.”

Magola is not the only one who is after the $1 million prize, as the James Randi Education Foundation receives hundreds of claims every year. The spokesperson of the Foundation states that it “is committed to providing reliable information about paranormal claims. It both supports and conducts original research into such claims. We offer a one million dollar prize to anyone who can show, under proper observing conditions, evidence of any paranormal, supernatural, or occult power or event. Unfortunately to date, no one has passed the preliminary tests, but we always welcome new challengers.”

Although the phenomenon of psychokinesis has not been properly studied, it is believed that people can control the physical world surrounding them with the power of their mind. Ellie Crystal, metaphysics expert, agrees that “everyone has the potential to be able to be telekinetic”.