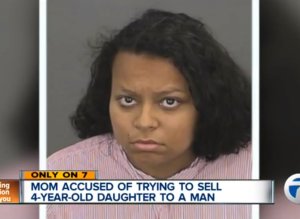 A mother is accused of trying to sell her daughter to a stranger for money.

Jennifer Marie Brys and Edward Cody Reardon were arraigned on charges of child sexually abusive activity and using a computer to commit a crime.

Warren police say she placed a prostitution advertisement on Backpage.com. She was contacted by Reardon of Lincoln Park. According to investigators, the two exchanged several texts. We’re told his interests shifted from Brys after he learned she had a 4-year-old daughter.

In one text message, Reardon allegedly wrote, “To be honest I won’t even wanna do like much with u… I really like her.”

Investigators say Reardon was willing to pay $200-$300 for time with Brys. When he found out she had a daughter, he allegedly agreed to pay at least $300-$500. He allegedly said he wanted to shower with the child.

The day before the transaction was suppose to happen, the child’s father found the text messages on the cell phone and contacted police. Investigators believe he is Brys’ ex-boyfriend and not connected to the case.

Reardon’s parents were in court as he was arraigned. They didn’t want to comment on the case.

The child is with her grandparents’ now.