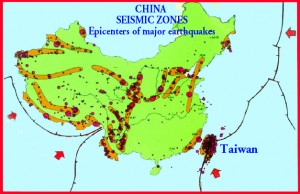 Multiple earthquakes hit northeast China today, with a 5.5 magnitude the strongest among them, according to seismologists, causing serious damage to homes.

The 5.5 magnitude quake hit at 6:04am, 34 kilometres north of Changling in Jilin province at a shallow depth of 12.5 kilometres, the US Geological Survey said.

It was followed around thirty minutes later by a 4.9 magnitude quake just south of Qian’an town, with a similar tremor felt a day earlier in the same area.

Some villages lost power, according to the Xinhua news agency, which did not mention casualties.

A magnitude 6.6 earthquake in southwest China’s Sichuan province killed about 200 people in April, five years after almost 90,000 people were killed by a huge tremor in the same province. [AFP]