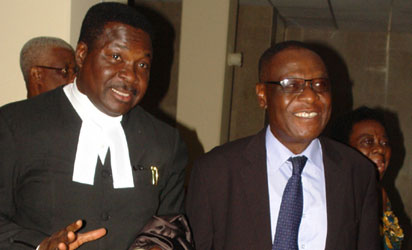 An FCT High Court on Wednesday adjourned the hearing of the alleged embezzlement of N16 million against a former Inspector-General of Police, Sunday Ehindero, to Jan. 14, 2014.

The Independent Corrupt Practices and other Related Offences Commission, ICPC, filed a six-count charge against Ehindero and John Obaniyi, the suspended Commissioner of Police-in-charge of Budget at the Force Headquarters.

According to ICPC, the amount is the interest generated from N567 million donated to the Nigeria Police by the Bayelsa Government for the purchase of arms, ammunition and riot control equipment.

Justice Mudashiru Oniyangi fixed the date after ICPC Counsel, Mr Okur John-Paul, informed the court that Ehindero`s appeal was yet to be heard at the Court of Appeal.

The Counsel to Ehindero and Obaniyi, Mr Emmanuel Ekeocha and Adam Odoriki, told the court that that was the situation.

NAN recalls that on June 27, Oniyangi adjourned the case to Nov. 20 because Ehindero’s appeal was still pending at the appellate court.

Ehindero is challenging the ruling of Oniyangi delivered on Sept. 22, 2012.

In that ruling, Oniyangi held that the ICPC had by the proof of evidence before the court, successfully established a prima facie evidence against the accused to warrant their being put to trial. (NAN)